Henry Dearborn (1751–1829) was a doctor, soldier, and statesman who dedicated his life to the cause of liberty.

Dearborn was born in Southeastern New Hampshire, in North Hampton, to a long-established and well-respected family whose roots stretch back to the earliest days of the Massachusetts Colony, when the Dearborn family arrived in the New World in 1639. 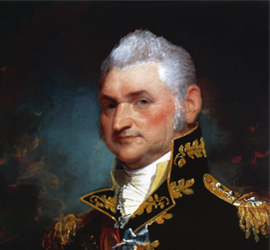 After completing his studies at a public school, Dearborn trained under Dr. Hall Jackson of Portsmouth, New Hampshire. Dearborn eventually left the small seaside city of Portsmouth and opened his own practice in the rural town of Nottingham.

When news of the Battles of Lexington and Concord reached Nottingham, Dearborn, then aged 24, gathered about 60 other men and marched immediately for Massachusetts, sparking a series of events that would change Dearborn’s life.

During the war, Dearborn served in the First and Third New Hampshire Regiments of the Continental Army. He fought in the Battle of Bunker Hill, the Quebec expedition, the Battle of Saratoga, Battle of Monmouth, and at Yorktown, among many others. Dearborn steadily moved up the ranks over the course of the Revolutionary War, eventually becoming General George Washington’s deputy quartermaster general in 1781.

Following the war, Dearborn moved to Kennebec County, Massachusetts (now Maine), and eventually won a seat in the U.S. Congress, serving two terms, from 1793 to 1797. Dearborn later joined the Thomas Jefferson administration, serving as the young nation’s secretary of war from 1801 to 1809. During the War of 1812, President James Madison named Dearborn the senior major general of the U.S. Army, a position he held for just one year.

At the end of the War of 1812, Madison attempted to make Dearborn his secretary of war, but Congress rejected the nomination. Dearborn would instead serve as the ambassador to Portugal before retiring near Boston.

Henry Dearborn was a patriot who, despite having been largely lost to history, had a profound impact on the world. He served in arguably the two most important wars in American history and his service earned him praise and trust from giants like Washington, Jefferson, and Madison. The city of Dearborn, Michigan was named after Henry Dearborn, as was Fort Dearborn, which eventually became Chicago. A prominent road in Chicago, Dearborn Street, was named in honor of Dearborn and remains an important thoroughfare in the city today.

When the world desperately needed men like Henry Dearborn, he answered honorably and served with passion and distinction for decades. Like Mr. Dearborn, we are committed to devoting our lives to improving America, and by God’s grace, making the world just a little bit freer in the process.

PHOTO: Painting of Henry Dearborn by Gilbert Stuart. Provided through Wikimedia Commons. The photo of this painting, as well as the painting itself, is in the public domain in the United States.